Since I began on my journey through all things power tool, I have learned so many things. I’ve learned about tools I never knew existed, ones I never dreamed I might have a use for, and some that I really want in my collection just because they’re so awesome and I’m sure I can find a use for if I get creative enough. Let’s take impact drivers for an example. I knew there are power screwdrivers, and I knew there are power drills, and now I’m learning about impact drivers which are like power screwdrivers on steroids.

I’m starting to think the impact driver might be one of the world’s greatest inventions. I mean, how many times have you tried to put a screw or bolt into something and get so far, and then no matter how much power you try to put behind the drill you’re using, the dang thing is just stuck and isn’t going in any further. That leaves part of the screw (or bolt) sticking out and you have two options – take it out and find a shorter screw, or take it out and throw it across the room while you cuss like a sailor, stomp around, and basically have a hissy fit that any teenage girl would be proud of – and then go find a shorter screw. But if you use an impact driver, when the screw gets stuck, the “impact” mechanism of the driver kicks in and pounds away at that screw from the back, while simultaneously adding the power of a hammer and locking pliers to the bit. All that impact keeps the bit rotating while providing the force of a hammer, making that screw go all the way into whatever it is that’s presenting the challenge.

Today I’m checking out Milwaukee’s 2462-20 M12 Impact Driver. C’mon with me and I’ll let you know what I’ve been able to find out about it. 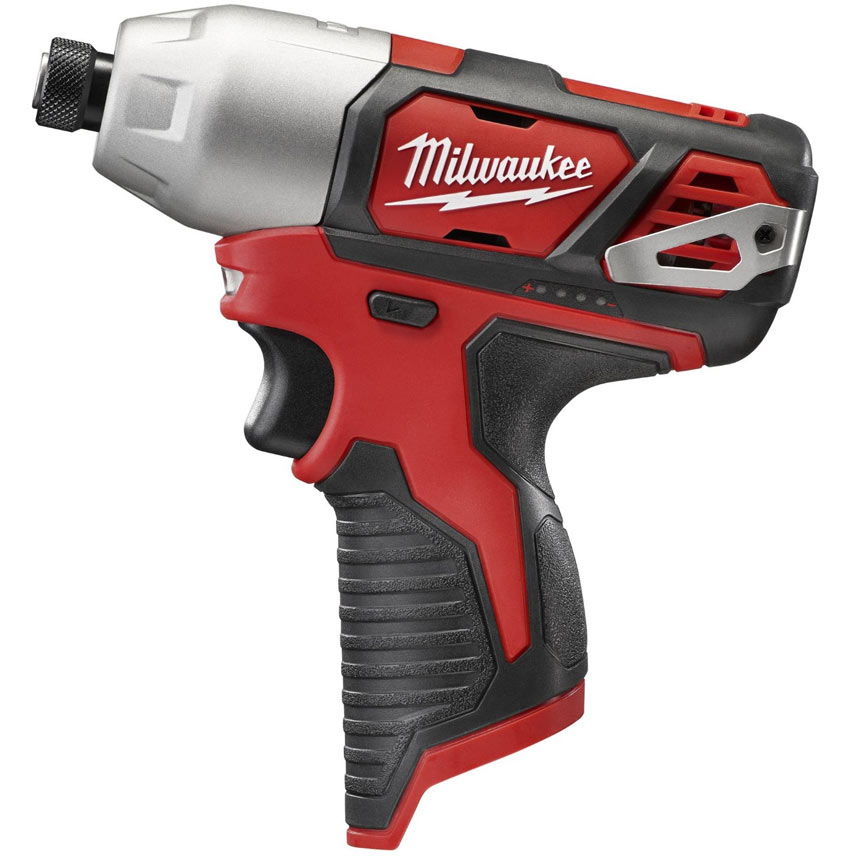 This impact driver isn’t quite as compact as some others I’ve reviewed, but it’s still pretty small and is part of Milwaukee’s M12 Subcompact System (which I’ll explain a bit later). I know not everyone wants to know exact specs, but some do for comparison, so for you (and you know who you are) the 2462-20 comes in at 2.3 pounds and measures 8 x 5 x 16 inches, so it’s very portable and seems really easy to keep with you, thanks to the built-in belt holder which has been dissed by a few users, but received mostly positive comments. It’s definitely a compact model, but it provides 1,000 inch pounds of torque and its top RPM is 2,500, which makes it a really powerful tool especially when you consider it’s running on only 12 volts.

Speaking of those 12 volts, let’s talk about Milwaukee’s RedLithium battery, which is used in most, if not all, Milwaukee tools. I’m not sure what makes the RedLithium batteries better than other Lithium-ion batteries, but Milwaukee claims they provide more power, up to 80% more run time, and will take more recharges than any other comparable Lithium-on battery, which can be something you might really want to take into consideration. Milwaukee has also incorporated its “Redlink Intelligence” into the 2462-20, which adjusts the amount of power the driver uses based on the information it receives regarding what that driver is doing, which translates to longer battery life and a much reduced chance of overloading the battery or burning out the motor.

It Fits the Part

Milwaukee made some adjustments to the pistol grip on this model and almost every user who commented on it loves it. It’s ergonomically designed to fit into your hand comfortably so you can use it all day with less fatigue, and you have more control over the tool as well. But not only does this little beauty fit into your hand all nice and snug, it also fits perfectly into a whole collection of tools by Milwaukee.

Milwaukee Tool has a line called the M12 Cordless System. Basically, they have created an entire line of cordless compact power tools focusing on durability, power, and convenience. There are now more than 60 tools in the M12 line, making it the largest sub-compact cordless system on the market, and it is also the #1 sub-compact system there is. Like many power tools which are part of a specific collection, the 2462-20 comes as a bare tool, which means you only get the tool and you have to buy batteries and a charger separately. One of the best things, in my opinion, about the M12 collection is that all the tools use the same batteries so you can have a whole workshop full of tools with interchangeable batteries. So the more tools you have from the line, the fewer batteries you will need to purchase. Just think, no more hunting around for the right battery like I always do because all my tools come from different manufacturers and different product lines.

It’s time now for my final thoughts and words of wisdom. After scouring several different sources of information and customer ratings, I found there are very few people who have reported problems or even things they dislike about this tool. In fact, there was one more feature mentioned positively more than once, and that’s the worklight, which incorporates a reflector behind it to make the lighted area larger. Milwaukee appears to have another winner here.

One of the great things about Milwaukee is that they offer a 5 year warranty against defects in workmanship. That’s a pretty good warranty. This impact driver might be a little larger than what I would really like, but it’s one I will certainly be keeping in mind and it might be the perfect addition to your toolbox.