There’s definitely something to be said about having a workshop full of a wide variety of tools made by different manufacturers. Because, let’s face it, there are some manufacturers that are really great at making one type of tool but not so much with others. Some have their specialties just like any other type of company. But there’s something almost magical about having a pair of tools that were just made to work together. Not only do they use the same batteries and chargers, but they help each other out, each one complementing the talents of the other. They’re kind of like spaghetti and garlic bread, steak and baked potatoes, burgers and fries, chocolate and peanut butter… is anyone else getting hungry?

Anyway, tool manufacturers often sell their products in combination packs, which are usually a pretty good value when it comes to pricing, and sometimes it can even turn out that you get one tool basically for free, depending on how many tools are packaged together and what their individual prices are. So I figured it would be a good idea to see what kind of combo packs are out there and check a few out. I absolutely had to take a look at Makita’s #1 selling combo kit, which is the LCT209W 2-piece combo kit. 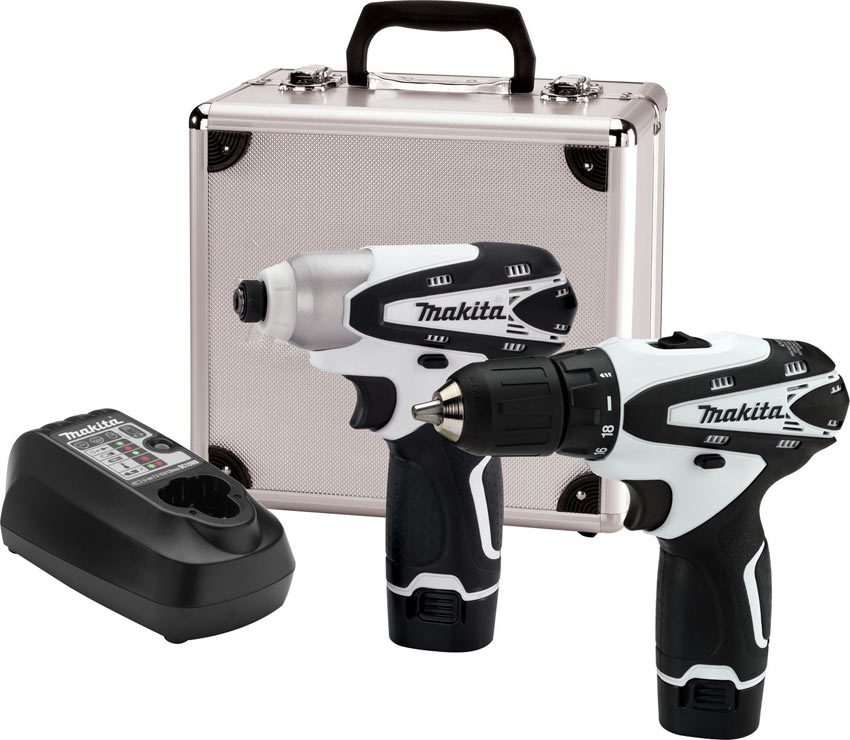 What’s In the Magic Box?

Combination packs come in all sorts of configurations, so the first thing we have to look at is what actually comes in the box. This combo kit by Makita features a two-speed power drill/driver and a variable speed impact driver (both cordless,of course), and it comes with an Energy Star qualified battery charger and two 12-volt max Lithium-Ion batteries so you never need to worry about running out of power in the middle of a project as long as you keep the spare charged up. It also comes in a pretty cool looking aluminum case, which I know a lot of you won’t really be excited about, but when my kid wants to explore the goodies in the workshop (under parental supervision), that aluminum case gives the set an entirely new “ooohhhhhh” factor, if you know what I mean.

The drill/driver in this kit is Makita’s highly rated FD02W 3/8″ drill/driver, which provides 200 inch pounds of max torque and 120 inch pounds of PTI torque in a tool that measure just under 7 1/2″ long. It has two speeds (0 – 350 RPM or 0 – 1,300 RPM) so you can always be sure you have the power you need, the handle is ergonomically designed to reduce hand/arm fatigue, and it only weighs 2.2 pounds. It has a standard 3/8″ keyless chuck which can accept standard smooth or straight shanks bits as well as 1/4″ hex shank bits. It of course has an LED worklight and an automatic braking mechanism which stops the bit from rotating as soon as the trigger is released. I haven’t been able to find any significant complaints about this drill anywhere. The worklight isn’t fabulous, which most aren’t anyway, and a few (less than 10 from what I found) said that it was only good for light work, but that’s what it’s designed for so I don’t really see that as being a legitimate drawback. It does what it’s designed for and it does a great job. So let’s check out this guy’s partner.

An Impact Driver that Makes an Impact

The second tool in this kit is Makita’s DT01W impact driver. This little baby has even higher customer ratings than its partner, and that’s saying a lot right there. Impact drivers are usually smaller than drill/drivers, and this is classified as “ultra compact”, so it makes sense that it only measures 6 1/8″ long with a weight of 2.0 pounds. But this little package provides a decent amount of punch for its size with 800 inch pounds of max torque, 0 – 2,400 RPM and 0 – 3,000 impacts per minute. The soft grip handle is ergonomically designed similarly to the FD02W, and with as lightweight as it is, you should be able to get a bunch of work done without your arm turning to rubber.

After looking at multiple customer review sites, I could only find four complaints about this impact driver, and two of them were about how it wouldn’t handle heavy duty jobs. Well, duh! It amazes me that anyone would think they’d get the same kind of power out of a 12 volt tool as they would an 18 volt or higher. People need to pay attention to what they’re buying instead of complaining that something won’t do what it isn’t designed for. It just drives me a little crazy, you know? So other than a few sour apples who apparently had no clue as to what they were buying, this driver is well loved and well rated by customers who have had them last in excess of several years with pretty steady usage.

Now, as I said earlier, buying combination tool kits can sometimes save you big money and that is certainly the case here. Looking at Amazon pricing, as of this writing this combo containing both tools runs $119, but if you buy them separately it would be about $220 and you would get four batteries and two chargers, but do you really need that many batteries and chargers? If you do, buy them separately and still save money!

So let’s recap. The Makita LCT209W combo kit comes with two very highly rated tools – a drill/driver and impact driver, both designed for light jobs although they have more punch than you would expect from a typical small sized 12V power tool. It includes two 12 volt max Lithium-Ion batteries and an Energy Star certified battery charger which will charge those batteries in less than an hour. And you even get a sturdy aluminum case to hold everything. This appears to be a great deal on some really high quality Makita tools that just about anyone could use.