Hitachi is a name that’s known by just about anyone who has bought a few power tools. Their tools are professional grade, but priced pretty comfortably for the everyday Joe Schmo. They make just about every power tool you can think of, and probably a few you may not know even exist. So of course, I had to check out at least one Hitachi product. The Hitachi DB3DL2 Lithium-Ion 3.6 Dual-Position Volt Cordless Screwdriver is one that I took a really good look at. It actually caught my eye because of its dual position handle, which I found intriguing. I know there are other tools with that feature, but I was looking at Hitachis and this was the one that got me.

The DB3DL2 has some really good features going for it and doesn’t seem to have very many problems at all. It looks like this could be a top contender. You’ll have to judge it for yourself, but I’m going to share with you what I found out about it. 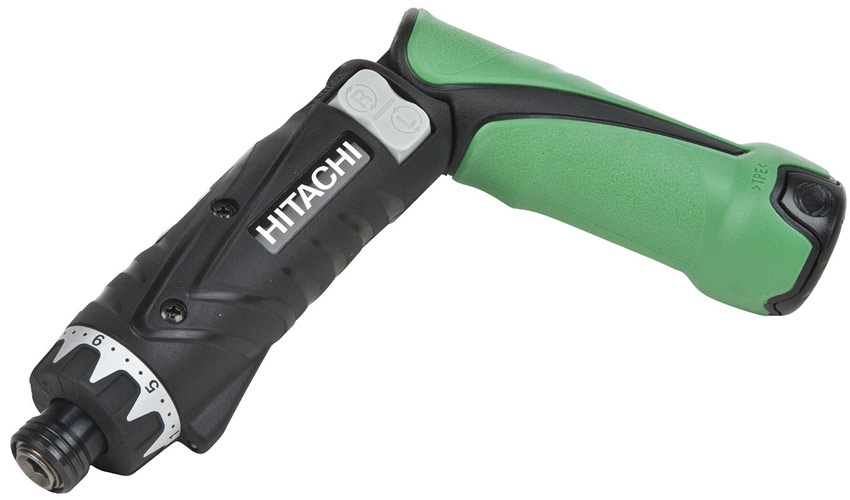 First off, let’s talk about this screwdriver’s dual-position handle. The screwdriver can be used in the straight position like every other electric screwdriver on the market, but it can also be used at a 90 degree angle. There are other screwdrivers that are made with a 90 degree angle, but just like straight screwdrivers, there’s only one way to use them. So basically, this screwdriver can do the job of two separate ones because of its dual-position handle. It also provides more flexibility for using it in smaller spaces where its full length won’t fit, and I like flexibility. There does seem to be a small issue with the handle which some people have voiced complaints about, and that is the fact that the handle doesn’t lock into place in either position. It’s definitely something to keep in mind, and you’ll want to be careful to be sure it doesn’t slip out of position when you’re using it, but I think that’s probably just a matter of paying attention to what you’re doing. I have a tendency to be pretty focused, though, so I don’t think it’s going to be a dealbreaker for me.

When it comes to bonuses, an additional battery is one of the best, at least in my mind. I want tools that either use the same battery other tools use, or I want an extra battery. Actually, an extra battery is pretty essential because you sure as heck don’t want to be in the middle of a job and have to stop because a tool’s battery goes dead. It’s irritating, it’s inconvenient, and it’s unnecssary. But one thing I don’t want to have to do is buy an additional battery. Most of the time the price is pretty close between buying a tool that includes a second battery or buying a tool plus an additional battery, but I always perceive it to be a better deal if I only have to pay once. Maybe that’s a guy thing. Kind of like buying two things constitutes “shopping”, which just isn’t my thing.

While we’re on the subject of this tool’s battery, let me tell you about it. It’s a 3.6 volt lithium-ion battery, which means it has a life of about three times that of a NiCad battery and it weighs about half of what a comparable NiCad battery does. A lighter battery means a lighter tool, and who doesn’t like that? The DB3DL2 also comes with a quick charger that will put a full charge on one of these batteries in as few as 30 minutes, just in case you forgot to put the dead one on the charger the last time it died. Yes, I am guilty of that. The charger also incorporates a particular technology that’s proprietary to Hitachi, which provides overload and discharge protection for the batteries. A battery charger with both beauty and brains. I don’t think it gets any better than that.

Cordless screwdrivers can be used for so many different things, and unless all you use one for is hanging pictures and tightening loose cabinet screws, it’s pretty important to be able to control the amount of torque you get. This driver has 21 clutch settings. You read that right. 21 clutch settings. Plus one drill setting! I know a lot of you aren’t going to be excited by that, but there are plenty who are going to think that’s the bomb. I know I do. I’m not sure how strong the max setting is, but the lowest setting is apparently perfect for working on computers, r/c vehicles, appliances and other electronics, as long as the screws aren’t too deep.

There are a few other things I want to mention, but they don’t each need an entire section to themselves, so I’m just going to batch them here. The DB3DL2 has an LED worklight that can be turned on and off separately, with its own switch, rather than being on all the time. The light is brighter than the one this driver’s predecessor had, which is nice, even if it isn’t positioned perfectly for the light to be directed in exactly the right place. There is a spindle lock so it can be used to tighten screws manually, as well as an easy to use forward/reverse switch and a choice of two speeds so you can have better control over what you’re doing. The chuck is a 1/4 inch hex chuck, so it can be used with a multitude of bits – which need to be purchased separately if you don’t already have a bunch, because the only bit it comes with is one Phillips head bit.

Overall, the Hitachi DB3DL2 seems to be a pretty good all around screwdriver. It has a lot of great features and a few minor issues, just like every other tool that’s ever been made. This one, however, is backed by Hitachi’s Lifetime Lithium Ion tool warranty and a 2 year warranty of the battery, so if any problems do occur, you’re pretty much covered.

It looks like this could definitely be a good addition to any tool kit, and it’s priced reasonably, too.