I was just wandering around the power tools to see what I could see, when it jumped right into my line of sight. I cautiously moved closer, not wanting to frighten the beast (or myself), and when I reached out my hand to touch it, I could feel the roar of its thunder in my blood and I knew I had to possess it before it possessed me. This was my first vision of DEWALT’s 20V max Lithium-Ion Hammer Drill that comes in the DCK290L2 combo kit, but it would not be my last.

Seriously, folks, how can you resist the lure of the power embodied in a 20-volt hammer drill, especially if it comes with a matching impact driver? I took a closer look at these beauties, picked them up and felt their weight in my hands and imagined drilling row after row of holes into a concrete wall. After congratulating myself on having left my wallet in the car, preventing myself from making the impulse buy I really wanted to make, I went on out and drove home so I could do some investigating into what might possibly be the greatest thing I’ve ever encountered. Let me share with you my journey. 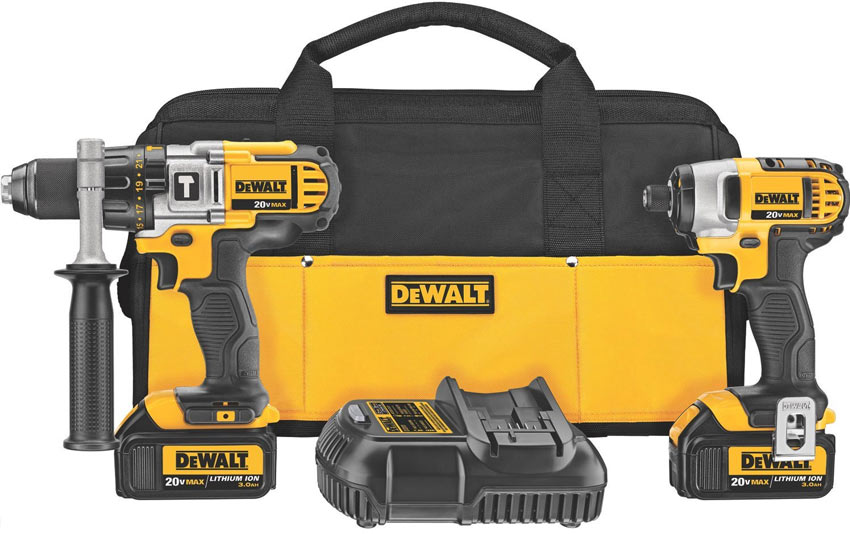 DEWALT is one of the most well known names in power tools and I’ve reviewed some of their other tools on this site, but I think this combo kit really stands out. To start with, both tools are part of DEWALT’s line of 20-volt max Lithium-ion tools. I know that doesn’t sound like a big deal, but DEWALT really put some thought and effort into this line with improved design and engineering to provide contractors with the performance they need every day. This combo kit includes the DCF885 1/4-inch impact driver and the DCD985 1/2-inch hammer drill, along with a 360 degree side handle, two of DEWALT’s powerful 20-volt max 3.0 Ah Lithium-ion batteries, a fast charging (30 minute) Energy Star qualified battery charger, a belt hook and a contractor bag.

DEWALT builds their own specially designed electronics into the switches of many of their tools, including these, which protects the tools and batteries from getting overloaded or overheated during use, which is a very nice feature for those of us who can sometimes get carried away and go a little crazy with our power tools. The battery charger that’s included will charge 12-volt max batteries as well as the 20-volt max batteries these tools use, so if you have any of DEWALT’s 12-volt max tools, you can use this charger for those batteries, and that kind of versatility can be really helpful on the jobsite.

Another feature I really like is the 20-second delay on the work lights which keeps the lights on for 20 seconds (thank you, Captain Obvious) after the trigger is released, and unless you’ve had to actually use the work lights on your tools, you won’t know what a great feature that is, but I know those who have been in that situation know exactly what I’m talking about. So now let’s take a look at each of the tools separately.

One Heck of a Dandy Driver

The DCF885 1/4-inch impact driver is made to be compact without sacrificing comfort or power. Its motor delivers up to 2,800 RPM, which DEWALT says is up to 43% faster than other impact drivers, and 1,400 inch pounds of maximum torque. Weighing in around 5.5 pounds including the battery, it is a bit heavier than the other impact drivers I’ve reviewed, but it has a lot more power, too. It might be more power than a do it yourselfer needs for around the house, but you’ll never hear me dis on the power of any tool or the capability of any of you to handle it.

Unlike a lot of other impact drivers, the chuck on this one doesn’t only take 1/4″ hex bits but it will also take 1″ bit tips, making it more flexible and versatile, which is always appreciated. The last feature I have to mention is the work light or, should I say, work lights. I love when I see tools like this that have 3 work lights surrounding the chuck so the entire work area is lit up instead of having just one light that throws shadows and doesn’t let you see what you need to, and it has the 20-second delay after the trigger is released, as I mentioned earlier.

Made to Conquer Concrete

Not just concrete, but masonry and brick as well. The DCD985 1/2-inch hammer drill is, quite simply, pretty darn impressive. The motor in this puppy delivers a maximum power of 535 unit watts out and the 1/2-inch self-tightening chuck has carbide inserts for exceptional gripping strength, which reduces the possibility of bit slippage when working with high end torque (which in turn makes for a longer lifespan for the tool).

Now let’s talk transmissions. You get an all-metal, patented three-speed transmission that provides your choice of 0 – 575, 0 – 1,350, or 0 – 2,000 RPM, which is up to 30% faster than other cordless hammer drills on the market today, so you are assured you’ll get the speed and efficiency you need for the job at hand.

To Buy or Not To Buy?

I have to say that if you need an impact driver and hammer drill, I don’t think you can go wrong here. The DEWALT name stands on its own merits without any help needed from me, but if you do need some additional back-up, so to speak, I can say that after perusing about a half dozen sites with customer reviews, I only found one review that was lower than four stars.

This combo pack not only features contractor quality tools and energy efficient batteries and charger, but it comes with a heavy duty contractor bag that holds everything and still has room to spare. Its heavy duty construction is just as rugged as the tools it’s designed to carry, and that’s really saying something. So the bottom line here is: if these are tools you need, or if you just really need to have them to quell the power tool hungry beast within, make sure you check out this combo along with the other available choices and I’m certain you won’t be sorry you did.