Black and Decker has been a household name for decades, and they’ve been around for nearly a century. Can you believe that? They were the ones who set the standard for today’s power tools when they filed an application for a patent in 1916 for a 1/2 inch portable electric drill featuring a trigger switch and pistol grip. So you know these guys know what they’re doing, and they’re always doing something new. Now, what sets Black and Decker apart from most of the other big names is that their main focus is on the homeowner – the do it yourselfer. They actually started the first line of drills for consumers when, in 1946, they introduced the world’s first portable electric drill made specifically for consumers. Not ones to sit on their laurels, the company continued to be at the forefront of advancements in power tool technology, always striving to come up with the next best thing.

I’m not going to bore you with more history, even though I find it fascinating, so let’s timewarp 63 years into the year 2009, when B & D introduced their SmartSelect technology, which lets users choose the amount of power and speed they need for different projects. Since that time, this technology has been incorporated into many of their tools, including the LI4000 SmartSelect Screwdriver I’m reviewing today. See how I went from a boring history lesson to an exciting review that you just have to read? I tell ya, sometimes I amaze even myself. So let’s take a look at this baby. 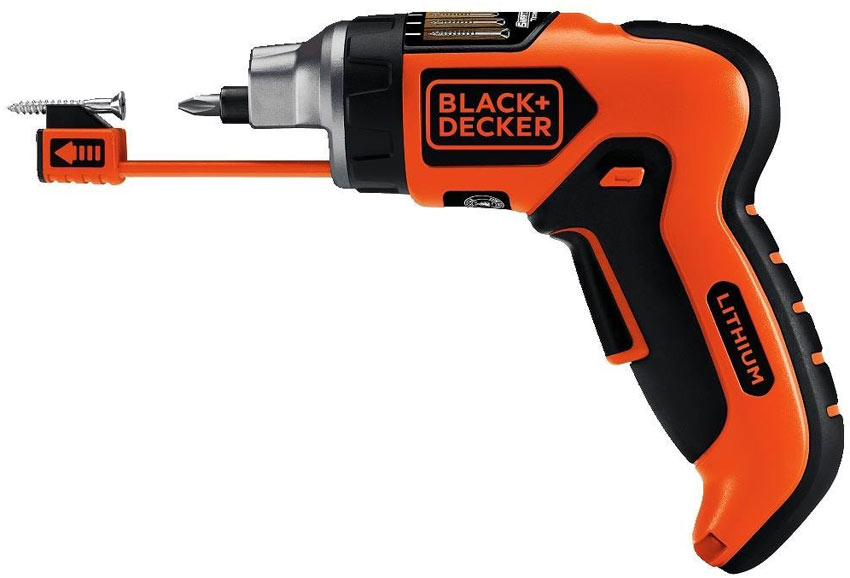 “SmartSelect” – Sounds Cool, But What Does It Mean?

Before I get into “SmartSelect,” we need to first look at what this screwdriver does so we can understand how the technology works with it. First, let’s take a look at the power this thing has. Its maximum power is 70 inches per pound of torque, at 180 RPM, which should be plenty of power for light household jobs like installing shelves, cabinetry, towel bars, lights, electrical outlet plates, assembling furniture, etc. Remember, it’s not a drill, it’s a screwdriver designed for basic home repairs and light assembly projects, so make sure your expectations are realistic. Ok, so now that we have that settled, let’s move on.

The LI4000 has two separate features to keep you from stripping screws, which can be easy to do with a lot of electric screwdrivers and drills. The first thing it has is a six-position clutch featuring visual indicators. Now here’s the really cool part – the SmartSelect technology. It lets you easily choose and select the right amount of torque you need for your project. These two features work together to help you get the best performance from the tool without damaging your fasteners.

The LI4000 is powered by a rechargable 3.6-Volt Lithium Ion battery that can hold a charge for up to a year and a half, if you treat it right. Let me explain that because there have been some user complaints about the battery not lasting very long. The Users Manual specifies that that battery needs to be used or, at the very least undocked, on a monthly basis. This keeps the battery in optiumum working condition and will save you the frustration of finding out it isn’t holding much of a charge when you go to use the screwdriver after it’s been sitting in the charging cradle for six months.

The battery charger you get with the screwdriver is Energy Star rated, meaning it is in compliance with strict guidelines set by the U.S. Department of Energy and the U.S. EPA for energy efficiency. Energy Star rated battery chargers can save more than a billion kilowatt hours of energy every year, and as an owner of the LI4000 and its battery charger, you would be contributing to that. And who doesn’t want to help the environment, especially when it’s this simple to do?

While we’re talking about the battery and the charger, let’s take a closer look at the charging cradle itself because I think it has some nice features you’ll really like as well. The screwdriver comes with 11 different bits that you can use with it. You can always purchase more, but they give you a nice selection to start out with so you don’t have to buy anything extra right away. You will, of course, want to hold onto all those bits, so the charging cradle has a built-in storage space for them so they won’t get lost! As long as you actually put them back – they can give you the space, but you have to use it. One more thing you might really like is that the charging cradle can be mounted on the wall so it doesn’t take up any space on your workbench. Oh no, I almost forgot! The charging cradle also has an LED indicator that will let you know when it’s time to charge the battery. Simply stated, that’s pretty nice.

Everyone Can Use a Friend

Thanks to Black and Decker’s concern for the consumer and all the folks who use their tools, they have included some pretty user friendly features here, in addition to everything else I’ve already covered.

Like most electric drills and screwdrivers, there is an LED work light to help you see when you’re working in areas of lower light. And from what I’ve seen, it looks like it’s lined up pretty well, just above where the screw is, so you can actually see what you’re doing.

In addition, the forward/reverse switch has an indicator that’s easy to read, so you can quickly see which mode you’re in. And now here’s a really great feature I personally love – the patented retractable magnetic screw holder. You pull out the slider, insert your screw, and then retract the slider to line up the screwhead with the bit. No more trying to stick the screw to the bit and hold it in place without dropping it before you get it placed on the wall or whatever the screw is going to go into. It might sound silly, but for me, that is a major irritation, so I’m really liking the screw holder, and I know I’m not the only one with that problem.

So after taking into consideration everything I found out about the LI4000, I think it may have a few drawbacks if you’re looking for something more heavy-duty, but if you don’t expect it to do more than what it’s designed for, it could be a great little addition to most toolboxes. It’s not going to help you build a deck, but it should certainly take care of small household jobs and assemblies, especially if holes are pre-drilled. It certainly has some perks other screwdrivers don’t have, like the 11 included bits with storage, wall mountable charging cradle, and a work light that’s actually placed correctly. So if you’re looking for a new little friend to help with small jobs, you might want to take a closer look at this one.